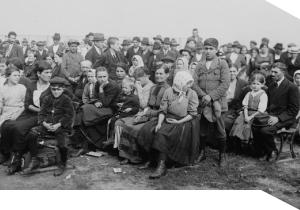 Tips for Finding Your Immigrant Ancestors

The stories of our immigrant ancestors are inspiring and fascinating - the genealogical records that help us piece together how, when, and why our ancestors immigrated to America are some of the most sought-after for good reason.

These records can be hard to find, so it's important to take the right approach to accomplish this research goal. Since New York is one of the main gateways of immigration to America throughout history, the NYG&B has been helping people find their immigrant ancestors for over 150 years. Earlier this year, we delivered an hour-long session at the RootsTech 2019 conference titled Trace the Story of Immigrant Ancestors in 3 Steps.

We covered crucial strategies and looked in-depth at immigration and naturalization records. Read below for a selection of tips from the lecture, and make sure to watch the entire recording for free through the video player at the end of this article.

Researchers should complete a reasonably exhaustive search of the immigrant ancestor’s life after they arrived in America. Begin by focusing on research in this country before you attempt to search for records in their country of origin.

The more we learn about an immigrant ancestor’s life after they arrived, the better we can trace their story. In doing so, you will encounter crucial information that you will need to piece together this story, such as date of immigration, place of origin and many other important facts.

Strategies and tactics should vary greatly depending on the period

This core truth of genealogical research also applies to the records of our immigrant ancestors. As the United States grew and evolved over the centuries, so did the processes that generate the records we’re interested in.

This is why it’s crucial to take a step back, forget about the names and dates, and do some research on the general history of the records you need. Knowing when and how processes changed will give you vital clues that will help you find and interpret the records you seek.

Census records are the perfect place to start

Working backward through census records is an excellent way to start. Try to locate the immigrant and their household in both federal and state census records.

Most censuses will ask each individual where they were born - an excellent piece of information for determining exactly which ancestor of yours was an immigrant.

Some censuses also ask about naturalization, which is the process of formally becoming a United States citizen.

Naturalization is an important part of the immigrant ancestor’s story, and records generated by this process can yield valuable information about their journey to America.

You can use consecutive censuses to create a time window during which your ancestor was naturalized - this will be very helpful for investigating their naturalization.

Though the exact process for becoming a United State citizen has evolved, it almost always involved two steps that would happen years apart.

First, the immigrant needed to formally declare their intention to become a U.S. citizen. The document produced by this first step is known as the Declaration of Intent (sometimes called “first papers”).

There was then a waiting period that (for the most part) was five years long. After this waiting period, the immigrant filed their official Application for Citizenship - part two of the process.

It’s important to remember that since there was a number of years between steps, these records could exist in totally different locations. An ancestor could have filed their declaration of intent in New York City, but then moved to Chicago and filed their application for citizenship there.

For more information on naturalization records and where to find them, skip to about 43 minutes in the video presentation below.

Avoid making assumptions: Your ancestor’s name was not changed at Ellis Island!

Immigrant stories passed down through generations are filled with unverified family lore, and there are many widely believed myths about immigration as well.

A prime example is the old "name change at Ellis Island" myth - the reality is your immigrant ancestor’s name was almost certainly not changed at Ellis Island - but that doesn’t mean it didn’t change.

One commonly overlooked source of name changes are naturalizations that occurred after 1906.

Before 1906, an immigrant needed to file for citizenship and a name change (if they desired one) in separate processes. After 1906, immigrants were able to file for name changes along with naturalization - if that’s the case, the naturalization records will contain all the information you need to uncover your family’s original name.

You don't have to immediately assume that other stories are false - just don't take them at face value and assume they are true. Take the approach of the rigorous genealogist - seek to verify everything with acceptable evidence!

While you should begin with a focus on records within the United States first, don’t forget to eventually seek emigration records once you know more about your ancestor’s journey.

There may be a record of your ancestor leaving their home country, and depending on the period this can provide crucial information about exactly where they lived in their old country.

Keep in mind that your ancestor’s transoceanic journey may have originated in a port far from their home - it was not uncommon for journeys to take several legs, so you may even find them in the records of a country where they did not live.

Ashley Lish covers this in the passenger lists section of the video below.

Of course, New York City was not the only port that immigrants came to the United States through. Boston, Philadelphia, Baltimore, and New Orleans saw many immigrant arrivals.

This is important to know even if your family lore says your ancestor arrived in New York - in fact, even census records can incorrectly identify New York as the port of arrival.

Why? Family stories can change over time, and memory is an imperfect thing - census takers just wrote down what the head of the household recalled from memory. Decades after arriving, a different port city could potentially be misremembered as New York.

Full Video: Trace the Story of Immigrant Ancestors in 3 Steps