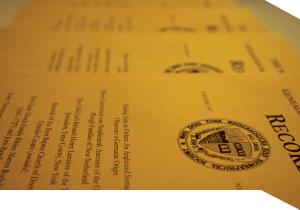 How to Use Periodicals for New York Dutch Genealogy Research

Millions of Americans have colonial Dutch ancestry, and many who spend time researching their New York Dutch ancestors face research problems related to this important group of settlers.

The colonial Dutch can be a tricky group to research. Not only are records about them some of the oldest in America, but there are cultural practices—for instance, Dutch naming patterns—that are different from those researchers may have encountered before.

Fortunately, there is a large body of existing, thoroughly vetted research on many New York Dutch families, and there are many ways in which a researcher can leverage this work to make further discoveries.

Whether you’re seeking an early immigrant’s country of origin, looking to prove your definitive link back to a colonial Dutch family, or just interested in exploring more about the earliest families of New York, it’s well worth exploring existing research on New York’s colonial Dutch families.

As with many areas of family history research, one of the very first steps in approaching a New York Dutch research question should be to determine what has already been compiled on the family in question and other associated families.

Genealogy periodicals are the perfect place to look - in this article, we’ll review how researchers may use the archives of The Record and other periodicals to examine the hundreds of compiled genealogies, pedigrees, and case studies on New York’s colonial Dutch families.

If you’re an NYG&B member, we recommend Henry B. Hoff’s article in the New York Knowledge Base, Researching New York Dutch Families: A Checklist Approach - a few of his suggestions are mentioned here, but he covers more options for Dutch research and lists dozens of additional sources and references to explore.

Why it's important to review already-existing work

Isaac Newton once famously remarked, “If I have seen further it is by standing on the shoulders of Giants.”

This is a worthy concept for genealogists to take to heart. There is certainly no need to repeat work that has already been done, but even more to the point - we can use the work of past genealogists to set us on the path to entirely new discoveries.

We may find articles that have been written specifically on the families or individuals of interest, but consulting the work in The Record has additional benefits - the authors provide excellent commentary not found elsewhere, as well as solutions to typical genealogical problems found in New York Dutch research.

The articles may also contain accounts of associated families that may not be mentioned in the title of the article, or in subject indexes (more on these below).

Having been published continuously since 1870, The New York Genealogical and Biographical Record contains hundreds of articles on the colonial Dutch of New York, holding a treasure trove of information just waiting to be discovered.

Using The Record to assist your Dutch research

NYG&B members get access to the full digital archive of The Record as a benefit of society membership. A full-text search of The Record collection in the eLibrary will query every page of every issue that has been published - researchers can search by name, location, or keywords.

As Henry B. Hoff suggests in Researching New York Dutch Families: A Checklist Approach, it’s important for researchers to take the time to conduct a very careful and thorough reading of these articles in order to maximize the value gained.

Researchers who are not NYG&B members may use the indexes to The Record, which are free and open to the public, to review article subjects and the names found within them.

The Record is available to search in our Online Records Platform. Researchers can search an every-name index to The Record, which includes event details, article titles, and links to read the full article in our digital archive. A full-text search version of The Record is also available, which queries the full text of every issue that has been published.

Examples from The Record

Because of its depth and volume, it would be impossible to list all articles that may be useful for researchers in The Record.

Here are just a few examples that Henry B. Hoff mentions and why they are important for researchers focusing on New York Dutch to read: This article, written by Curtis Dewees and Jack C. Vaughn in volume 125 of The Record, summarizes research that corrected past misconceptions about this immigrant Dutch family. The article is a prime example for researchers because part of it tackles a familiar problem of identity - do records of a Gerrit Hendricks from Amsterdam all refer to the same man? In addition, it addresses Dutch naming practices, which were the cause of earlier mistakes, which the authors suggest "had arisen in large part due to lack of familiarity with the continued use of the patronymic system of naming in America."

"A Johnson/Jansen Family of Brooklyn and New York"

This article, written for volume 111 of The Record by Henry B. Hoff, examines a "three brothers" legend related to the purported origin of the General Jeremiah Johnson family of Brooklyn. Aside from being an interesting read about the origins of a well-known New York family, researchers should examine in detail how the author uses an analysis of the place of birth and residence given in marriage records to show relationship.

"The Verschuer Family of Bushwick: Its Roots in the Netherlands and Descendants Through Comegys, Fyn, Duryea, Covert, and Simonson"

This installment of an article written by Harry Macy Jr., also in volume 125 of The Record, focuses on identifying Magdalena Verschuer as the wife of Joost Duryea Jr. An entire installment in a series of articles about these families is dedicated to this problem and solution since it's an interesting and noteworthy case study. The author cracks the problem by analyzing naming patterns and the husband's contacts as a witness among other methods.

Harry Macy Jr. also authored this article, found in volume 116 of The Record. The article tackles a mystery involving an early eighteenth-century group of people in Jamaica Queens, bearing the patronymic Gerrits(en), but no other surname. Although, as he notes, "records for the time and place are typically incomplete" (a challenge facing many New York Dutch researchers), he was able to provide sufficient evidence that all of these Gerritsens in Jamaica "were brothers and sisters, the hitherto largely unidentified children of Gerrit Lubbertsen and his wife Geertruy Willems Van Boerum." The author solves this problem by analyzing baptismal sponsors found in records, but also interpreting evidence in light of typical Dutch naming patterns.

Don't overlook other periodicals: Use PERSI

One that he mentions is the Periodical Source Index, widely referred to as PERSI.

PERSI is one of the most powerful, but under-utilized resources for genealogy research around today.

For many years, the Allen County Public Library in Allen County, Indiana, has been collecting genealogy and local history periodicals from around the world and building a comprehensive index to them. These periodicals will often have compiled genealogies and other research that is published and well-vetted.

There are so many articles in PERSI it’s almost guaranteed there is something in there that’s relevant to your research - there’s a lot in there about the New York Dutch, but many, many other subjects as well. Once an article of interest is found in the index, it is easy to get a copy.

This is important work and crucial for researchers because many articles in these periodicals are not easy to find in Google or other mainstream search engines - you’ll often find many things in PERSI that you have never seen before.

The best part is, PERSI is completely free to use - you can view the detailed index entries by creating a free account on findmypast.com, where PERSI is now hosted. Visit www.findmypast.com/persi to learn all about using this resource.

We hope this article has given you plenty of ideas and resources to help you build off of the amazing body of  existing work New York Dutch families - if you have any favorite articles that you think are particularly useful for researchers to read, send us an email (along with your reasoning) to let us know and we'll add them to this post.