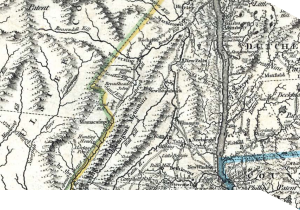 The Colonial Period of Putnam County: The South Precinct of Dutchess County

The NYG&B Blog is proud to present an excerpt of Pamela Ricciardi Paschke's recent feature article from the Spring 2019 issue of the New York Researcher magazine. Pamela is an expert genealogist and historical researcher, and has recently authored a published work that goes in-depth on this subject -  The South Precint of Dutchess County New York 1740 - 1790. She has spent years researching the Dutchess County area of New York, and is a member of the NYG&B as well as other notable genealogical organizations. We hope you enjoy - NYG&B members may read the complete article in the Spring 2019 New York Researcher.

Putnam County, New York, formed from Dutchess in 1812, ostensibly encompasses the patent granted in 1697 to Adolph Philipse. Extant tax lists chronicle the area’s significant growth, with taxable households expanding from 47 in 1741 to 849 in 1779.1

But this expansion was not without problems.

Ambiguous patent boundary descriptions, disputed land claims, aggressive (some would say greedy) proprietor landlords, and poor tenant farmers led to conflict and dissent. A 1754 survey split the patent among three heirs, and surveys in the 1760s further divided the land into farm lots.

However, rather than facilitating settlement, these actions inflamed discord. Some boundaries took decades to resolve, and landlord–tenant disputes culminated in a rent riot in 1766. With scarce records documenting family relationships, the family historian can use extant tax lists to provide evidence of residency, and the social and economic history of south Dutchess to provide insight as to why Dutch, French, and New England settlers moved in and out of the area in the colonial period.

History of the Philipse Patent

The Wappinger, a family tribe of the Taconic natives living in the Highlands of what was then southern Dutchess County, sold some of their lands in the late-1600s to Dutch speculators.

In 1697 Adolph Philipse received a New York patent2 on one such tract bordering the 1685 Rombout patent to the northwest, the 1697 Beekman patent to the northeast, the Hudson River to the west, the Colony of Connecticut to the east, and West Chester County to the south.

Three heirs (Susanna née Philipse, wife of Beverly Robinson; Philip Philipse; and Mary Philipse, later wife of Roger Morris) divided the land by taking one of each of the three types of lots.7

The 1754 survey and division of the land among the Philipse heirs took liberties with the north and east boundaries of the original Philipse patent. At various times between 1737 and 1771, the patent’s east and north boundaries were challenged by Native Americans, tenants, and adjacent patent holders. Conflicting claims to areas within the Philipse patent and disputed areas (The Gore and the 20-Mile Lands) were resolved through additional deeds and patents, a “great rebellion,” and contentious court cases.

Without going through all of the legal wranglings, at the end of the day, a portion of the land surveyed in 1754 included land previously considered part of the Rombout or Beekman Patents (included in the Rombout, Beekman, or Pawling Precincts). The Philipse heirs (led by Beverly Robinson) acquired title to those and additional areas north of the survey line (collectively called the Gore) from the proprietors of the Rombout and Beekman Patents,8 as well as lands east of the original 20-mile boundary referred to in the original Philipse patent. The Gore lands to the north were (generally) not included in Putnam County when it was split off from Dutchess County.

Similar names for different areas at different times creates confusion over the boundaries of south Dutchess precincts and towns. Research for 1772–1795 requires an understanding of changes in political boundaries.

In April 1772 due to significant population growth, the South Precinct was split into three precincts: Philipse along the Hudson River encompassing lots 1–4, Fredricksburgh for the interior lots 5–9, and South East for The Oblong lands.9

Official districts referenced the 1754 survey lots, but excluded land in existing Rombout, Beekman, and Pawling Precincts (even though the Philipse heirs claimed the land based upon ambiguous patent boundaries). See figure 1.

Further division occurred in 1795 when the area encompassing Fredericks Town and South-East Town was divided into four similarly sized towns: Frederick, Franklin, Carmel, and South-East,11 The west boundaries of lots 7–9 (the east boundary of lot 6) served as the north-south dividing line; the east-west line cut through lots 5, 6 and 8. Later, Frederick became Kent, Franklin became Patterson, and part of Philips Town (Philipstown) became Putnam Valley, with some boundary shifts along the way.

In March 1806, part of the northwest corner of the original Philipse Patent (that was then included in the Town of Philipstown) was annexed to the Town of Fishkill.12 This was the last significant change to the future boundaries of Putnam County. In 1812 Putnam was formed from the towns of Philipstown, Carmel, Frederick, Patterson, and Southeast.13

The earliest immigrant settlers of the Philipse Patent were Dutch and French who settled along the Hudson River.

Early settlement on the eastern end was primarily by families from New England. The interior of the South Precinct was hilly and more suited for ironworks than farming, so these areas were settled last. The Oblong was made up of smaller landlord lots but were still mostly occupied by farm tenants.

Most of the South Precinct lands were leased to tenants until the 1770s; only a few of the hundreds of farm lots were sold prior to the American Revolution. Unlike deeds, leases were not recorded in county records.

A few tenant lists covering 1758–1777 prepared by the landlords exist, but only for four of the Philipse patent lots: Beverly Robinson’s Lots 1, 4, and 7, and Philip Philipse’s Lot 8.14 Surveys of many of the nine lots were made in the 1760s; however, it appears none of the maps and only one survey book from the period survives.

The surviving 1762 survey field notebook serves as the basis for a Lot 6 farm lot map and tenant list created by this author.15 [Editor’s Note: it is always possible that records will be found that are not currently publicized. If researchers are aware of additional records of this nature, please contact the NYG&B so we can let our members know about them.]

It wasn’t until lands of Loyalists were confiscated16 and sold beginning in the early 1780s that a tenant might have the opportunity to purchase his farm—however, many lacked the wherewithal to do so. For the purchasers in the late 1700s, Henry S Concklin created maps of Lots 2–9 utilizing survey field books from 1810 in conjunction with the deeds.17 However, for many of the earlier tenants, the extant tax lists may be the only records documenting their residency.

When reviewing early surveys and deeds, consider that the due east-west lines used for these colonial surveys do not fall on a due east-west line on a current map because of magnetic declination.18 True north became easier to gauge in the 1780s with more sophisticated compasses.

The Great Rebellion of 1766

Between 1760 and 1765, there was growing dissent among the tenants due to onerous lease terms and a belief that the Philipse heirs claimed ownership to lands not rightfully theirs.

After some aggressive dealings, Robinson managed to not only acquire land to the north, but also unpatented land to the east of the original Philipse patent. Despite legal protests by the Wappinger tribe and many tenants, the Colony recognized the Philipse heirs as owners of all of the lands included in the 1754 division and the 20-Mile lands of the Beekman Gore ceded to them in 1758. Robinson (the leader of the heirs) was raising rents, shortening least terms, evicting tenants, and confiscating houses and other improvements without compensation. Tenants, when sued, and claimants against Robinson, et al., lost their court cases.19

The rest of this article - including details of the "great rebellion of 1776"  and guidance on using early tax lists for historical and genealogical research - can be read in the Spring 2019 issue of the New York Researcher. NYG&B members can read all recent issues of our quarterly publications right here on our website, www.newyorkfamilyhistory.org. The New York Researcher is published four times a year, and contains many fascinating articles on New York genealogy and New York history like the one above. Issues can be downloaded or printed for your convenience. If you enjoyed this excerpt, consider becoming a member!

1. Pamela Ricciardi Paschke, The South Precinct of Dutchess County New York 1740–1790, (Boca Raton, Florida: author, 2018), 222. These statistics include the 1 3/4 mile wide Oblong area along the Connecticut boundary, not part of the Philipse Patent. [Editor’s Note: Some researchers will refer to Clifford Buck’s works, however some inaccuracies in his works have been found.]

4. The Colonial Laws of New York from the Year 1664 to the Revolution, Volume II (Albany: JB Lyon State Printer, 1894), 957–957: Chapter 652, “An Act to divide Dutchess county into Precincts and to Repeal the Act therein Mentioned,” passed 16 Dec 1737. “The South Precinct [is] to contain all that part of the High Lands granted by patent to Adolph Philipse.”

5. In 1743 the precinct’s eastern boundary was formally extended beyond the Philipse patent lands to include the adjacent portion of The Oblong, a narrow strip conveyed by the Colony of Connecticut to New York in 1732 in settlement of a border dispute. The Colonial Laws of New York, v. III, 337 - 338, passed 17 Dec 1743. Pelletreau, History of Putnam County, 108 - 112.

16. Only Philip Philipse’s Lots 2, 6, and 8 were not subject to the seizure, however many of those farms were also sold in the ensuing years.

17. Henry S. Concklin, Maps of eight lots of the Philipse upper patent: compiled and drafted from descriptions in records in Dutchess and Putnam counties and based in part on the field book of John Conklin’s survey made in 1810. 1885-1887, New York Public Library, Map Division (photostatic copies). For maps of loyalist sales see William T. Ruddock, Confiscated Properties of Philipse Highland Patent Putnam County New York 1780–1785 (Westminster: Heritage, 2012); note that the overlay of the map for Lot 7 onto a current map is placed too far south in that volume.