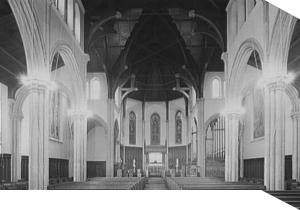 New York Catholic records online: What you need to know

One of the most significant developments to hit the genealogy world in the past few years has been the increased access to Catholic records online.

Findmypast, a leader in online genealogy records, has been the organization behind this effort - they have recently digitally published Catholic religious records from the United States, Ireland, and the United Kingdom.

Researchers everywhere have been able to access these crucial genealogical records for the first time, and this is an especially major development for researchers with ancestors in New York State.

Read on to learn all about the ambitious project and some need-to-know information about these records - what is online now, and what will be coming online in the future.

A Breakthrough for New Yorkers with Catholic Roots

Many New Yorkers have Catholic ancestors. Despite substantial discrimination in the early history of the state, New York’s Catholic population began to explode in the mid-1800s, due largely to Irish, and later Italian immigrants.

These records are valuable due to the challenging landscape of civil birth, marriage, and death records in New York State.

New York vital records are not organized in a single system - depending on the time and place of an ancestor’s life event, researchers will need to look in different repositories maintained by different organizations.

Furthermore, many municipalities in the state did not fully comply with New York’s record-keeping laws, so in many cases, birth, marriage, or death records will not exist. This makes religious records crucial vital record substitutes.

Findmypast has a central location for all digitized Catholic records, the Catholic Heritage Archive.

Sacramental Registers from the Archdiocese of New York were added to this archive in March of 2018, which was huge news for researchers seeking ancestors in New York. This initial release - and the images that have been published since - constitute only a portion of what will eventually be online (more detail on the publication schedule below).

Members of our society get free access to all North American records on Findmypast - including much of the Catholic Heritage Archive - as a benefit of NYG&B membership.

Jen gave a fantastic presentation that is an absolute must-watch for those who plan to use these records. NYG&B members can watch a replay on-demand in our webinar library.

The rest of this article will include some of the general information provided by Jen, but we highly recommend watching the full webinar for her more in-depth and expert advice.

Project timeline: Many more records will be brought online

This is a very ambitious project with a high degree of complexity, so it will take some time to fully digitize the records and make them available online. To fully understand the project and timeline, one must understand the nature of the physical materials that Findmypast has acquired.

Many - but not all - Sacramental Registers have already been captured via microfilm. Some have never been microfilmed, but still exist in their original format.

Findmypast has already created and published an index of all records that have been microfilmed. This is online and fully searchable as of this moment - it debuted in February 2018.

Along with the index, Findmypast has been digitizing all existing microfilm and putting those images online. This process is currently underway - for this reason, it is important to note that you may find a name in the searchable index, but the associated image may not yet have been uploaded.

Findmypast will soon begin the process of imaging all other known Sacramental Registers for the Archdiocese which have not yet been microfilmed. The final phase of the project will bring all of these records online, and will also digitize other collections made available by the Archdiocese, including their newspaper series.

Areas covered by the Archdiocese of New York

There are a few projects to bring online records from other Dioceses in New York, but the Catholic Heritage Archive on Findmypast only hold records from the above counties at this present moment.

For those interested, see below for a table that lists all other Catholic Dioceses of New York State:

What is in the records online right now?

It is important to note burials and cemetery records are not included - the project is to digitize only the Sacramental Registers, and these records do not capture deaths or burials, which are not considered sacraments. Furthermore, many cemeteries are organized and operated somewhat independently of the Archdiocese of New York.

As Jen notes in her presentation, baptisms often contain information on other religious life events, including events that happened after the baptism - Priests would often communicate and retroactively update baptism registers to reflect further sacraments. This isn’t always the case, but it is fairly common.

This makes seeing the original image very important - if you have found someone in the index, make sure to check back at a later date to find the image of their record - there might be more information on it.

As mentioned, not all parishes in the Archdiocese are online yet, and even the ones that are online will have many more records added to them. Fortunately, Findmypast has created a web page with a compiled list of all parishes, the approximate number of records, and the dates covered, so researchers can easily check up on what is currently available.

Visit Findmypast's New York Roman Catholic Parish List for a complete and up-to-date list of each parish currently available, the dates of record coverage, and the total number of registers available.

Other Catholic records on Findmypast: US and Ireland

While members of the New York Genealogical and Biographical Society likely have an interest in the Catholic records of the Empire State, researchers with family elsewhere should also examine the Catholic Heritage Archive as a whole - there are many Catholic collections from elsewhere in America, including Philadelphia and Baltimore, with records from Chicago, Cincinnati, Wilmington and Toledo on the way. Remember, members of the NYG&B have free access to all North American records on Findmypast.

For those with Irish heritage who are interested in tracing their heritage back across the Atlantic, Findmypast also has an extensive collection of Irish Catholic records, which serve as crucial supplements for the many missing records of Ireland. These Irish Catholic records are completely free to search and access - enjoy! (Editor's note: An earlier edition of this article mistakenly overlooked this crucial detail! Thanks to reader Ann D. for pointing this out.)