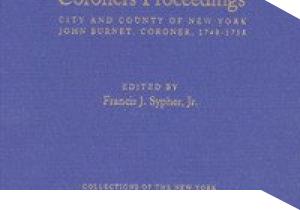 Evidence of an ancestor's death can be located in numerous types of genealogical sources - newspaper obituaries, municipal or religious death records, tombstones and more. One overlooked source - which will be an absolute goldmine if your ancestor turns up here - are Coroner's records.

The New York Genealogical and Biographical Society holds several works in our eLibrary that capture years worth of mysterious, suspicious or otherwise unnatural deaths that were investigated by the Coroner's Office.

For family historians, these records can solve (or create) family mysteries that will remain share-worthy stories for years. For general students of history, these documents help shed light on the dangers eighteenth and nineteenth century New Yorkers faced on a daily basis.

Coroner's Records from the NYG&B

Three different books are available for purchase in the NYG&B Store, and can also be viewed by NYG&B members in our eLibrary:

The purpose of the Coroner

The office of Coroner was established in English law during the reign of Richard I way back in 1194, and as such, was a part of the Colonial governance of the city before the Revolution.

The role continued after the Revolution as well. An act passed on February 14th, 1787 determined that the duty of the Coroner was to "go to the places where any be slain, or suddenly dead, or wounded, or where houses are broken open, or where treasure is said to be found, and shall forthwith command twenty-four good and lawful men...to appear before him... and shall upon their oath, and upon view of the body... inquire by what means and in what manner, the person so dead came to their death, and whether the person so dead be known or a stranger."

Given the above purpose, coroners were involved in a very specific type of death, so these records shouldn't be considered exhaustive in any way. But they do contain what we can consider to be the "juiciest" deaths from these times - many of these cases impacted the local community significantly.

So what unfortunate fates befell pre-industrial New Yorkers? Perhaps the one cause of death significantly more absent from today's Coroner's files was drowning. The frequency of drowning deaths in pre-industrial New York makes a lot of sense given the city's many waterways and most importantly, its role as one of the world's busiest ports.

One could find themselves struggling to stay afloat in the rough and cold New York waters many ways - drunken travelers often slipped and fell while boarding passenger ships; mariners fell from rigging or were knocked overboard by ship booms; ships collided, capsized and even exploded.

Alcohol was another surprising killer. There was essentially no regulation of the sale of alcohol - drinks could be any strength, and pharmacists would regularly sell opium and opium derivatives upon request. Combined with freezing-cold temperatures of winter, alcohol played a role in many deaths, especially those in their late teens and early twenties.

Accidents were quite common as well, and young children were particularly at risk. Given the state of medical knowledge, something as simple as a head injury sustained while horsing around the house could be fatal. The risk of choking on food or catching fire was ever-present - even a minor burn could lead to a fatal bacterial infection.

Im trying to find out if I can get the coroners report for my grandmother's suicide (stove gas) on July 26 1931. She died with an unknown may in a rooming house at 824 8th avenue in NYC. I don't think it would be in any of the books noted on this page as it probably a sensationalistic death. The death certificate is signed by a medical examiner so it seems the did an autopsy. I would welcome any information on if I might be able to obtain this document and if so, how to do it. many thanks.
| Wed, 02/20/2019 - 12:09pm
Hi, I am trying to find the death date and burial location of my great aunt. She died as a child from a fall off a fire escape. Her birth is recorded and she is included in the New York City/East Side 1900 census but beyond that there is no trace of her. Her name is Freda Schnellbach and she was born in March 1895 to Charles and Elizabeth Schnellbach. I have searched for years in vain and have found nothing. Thanks.
| Mon, 04/15/2019 - 10:31pm