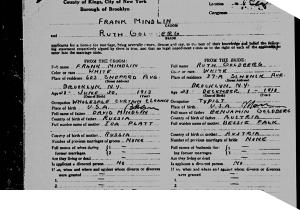 Additional indexes (1930-1995) to the New York City Clerk's marriage license and affidavits will become freely accessible online in the future. The data set indexes approximately three million names - many of which have never been accessible before - and covers 65 years of New York history.

These records have been released through the work of Reclaim the Records and will be made available with the assistance of the Internet Archive, FamilySearch, and others in the future.

The marriage licenses from the City Clerk's office contain some unique information (differing from what is on a marriage certificate) that can be hard to find anywhere else.

Read on for some expert advice on the collection, including what information you can find.

Indexes to the City Clerk's marriage licenses from 1908-1929 were recently made available for public access at the Internet Archive. This next batch will likely take some time to obtain and digitize, but we will make sure to update you when it's available to access online.

Leslie Corn, in a 1999 article for the NYG&B Newsletter (which is available as a research aid to NYG&B members) highlighted the importance and depth of these records.

Noting that they contain different information than marriage certificates themselves, Corn outlined the special information you can find:

Since the records contain these relatively rare pieces of information, Corn deems them "one of 20th-century genealogy's best primary sources" and we certainly can't disagree with that.

For anyone planning to search these records, Corn's article is a must read. It includes:

Members can access this helpful article here as part of their member benefits.