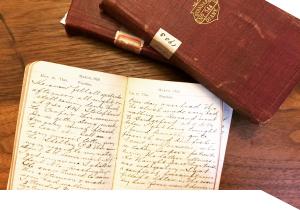 ohn E. Lewis was a New York resident who wrote in his diaries every day for seventy-seven years and captured life in New York during the era.

Mr. Lewis began writing his diaries on January 1, 1880, as a nineteen-year old young man, and continued to write until his eyesight was too poor to continue, at age 96.  He chronicled many major events in New York State and the nation, from the crash of Wall Street and the end of Prohibition, to the festivities for the commemoration of Henry Hudson’s voyage on the Hudson River.  Many people, places, and events are mentioned in the diaries, including the famous individuals Mr. Lewis heard speak at lectures in and around New York City.

Although there is no evidence that Mr. Lewis traced his genealogy, his diaries provide detailed information on his family members, and even an annotated index identifying every person mentioned in the diaries, with biographical information. While the majority of journals were written from Utica, New York, some were written from Ansonia, Connecticut, which is about three and half hours southwest of Utica.

The NYG&B digitized the transcripts of the diaries of John E. Lewis, and they can now be viewed in our eLibrary at Findmypast HERE.  The original diaries are held by the Society, but are too fragile to digitize.  They may be viewed in the offices by appointment only. Visit us on our website newyorkfamilyhistory.org for more information.