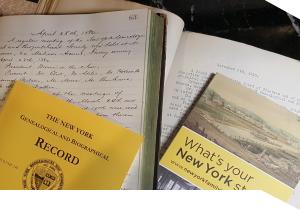 Earlier this year, we had our first ever live chat session with the President of the NYG&B, Joshua Taylor, and our Director of Education and Programming, Susan R. Miller.

We're excited to announce another installment in this series, which will take place on Wednesday June 21 at 4:00 p.m. ET. This event is free and open to the public. Josh and Sue will answer your submitted questions live on YouTube. Click here to register and submit your questions - you will also have a chance to ask questions during the broadcast via the chat window.

Read below for a few of the subjects covered in the last live broadcast, and get thinking about what question you want to submit for next week.

Josh and Sue gave out some useful advice after Michael asked a question about some unusual variance in a family's last name - the spelling of the German last name of the family he was researching changed so frequently that each of the family's numerous children wound up with a differently spelled last name.

Josh explained that reason for this is that standardized last name spelling is relatively recent, and before that, it was often phonetic. Especially with German last names, i's and e's and c's and h's often get left off - even within the same document! The t's and d's can change on German surnames too, so variations are especially common with this kind of research.

As so many people were either illiterate or partially literate, spelling mistakes could increase, compound, and never be caught - if the family members didn't know how to write the names themselves, they wouldn't know to correct a priest who made a mistake.

Michael also had questions about this same family, many of which came to America in the early nineteenth-century - he was wondering where to find naturalization records for them.

Sue pointed out that at that period in time, any court with a clerk and a seal could do a naturalization, so there is no single court to look in. People may not realize that these kinds of documents can be in a seemingly unrelated court - for instance, Francis Sypher, NYG&B fellow, has published Naturalizations in The Marine Court, New York City 1827-1835 & 1834-1840, which is accessible in the NYG&B eLibrary.

Many people wouldn't think to look here, but it was apparently a very accessible court for people in New York City, and there are many naturalization records in there. For early naturalization, it's really a matter of searching all sorts of different courts. Helpful information for this can be found in the court records chapter of the New York State Family History Research Guide and Gazetteer, and there's also helpful information on immigration and naturalization records in there as well.

Josh added that not all of our ancestors would have gone through this process, especially early in the nineteenth-century. Check all of the courts that were available at that time, including the various levels, and after you've done that reasonably exhaustive search, you may be able to develop a working theory that a given ancestor was not naturalized.

Carole has been researching family from Cattaraugus County and has found them in the census records, as well as land records from the Holland Land Company. She wanted to know if there were any other places she can look for evidence of this family.

Josh recommends when looking at people who purchased land from the Holland Land Company, look at the original records of the Holland Land Company to make sure they followed through with the original purchase - just because you found them in some records doesn't mean they necessarily followed through with the purchase and resided on that land. The other thing to look through would be church records for the area - if there's a religious affiliation for the family, that could lead you to some additional sources.

Sue added that aside from the Holland Land Company, it's possible they made land purchases or transfers that were recorded much later than when you think the transaction would be. Sometimes the deeds were not recorded until someone died or the land was sold by the subsequent generation. You may need to go a lot later in time for the land records than you think.

Sharon wrote that her great grandparents were divorced in 1898 or 1899, and she was looking for information about the divorce proceedings and hoping to find some record of the divorce.

Josh points out that contrary to what many people believe, divorce is not actually considered a vital record - it's a court record, so finding any sort of certificate can be almost impossible in some cases. You may be able to find some sort of document in the court proceedings that certifies divorce, but it's not usually the kind of record you can receive by requesting a copy from your state's government.

You'll have to head to a court in the area that had jurisdiction over divorces in that time period and look in those records. Sue adds that it's best to start with the County Clerk, but in New York, divorce records are usually sealed for 100 years, although the indexes for the County Clerk's records may be available.

Justin wrote in asking about early nineteenth-century birth certificates and where to find them. Susan notes that this is a question the NYG&B staff gets all the time, and  - especially for those researching very early New Yorkers - it's important to always remember that just because an event happened doesn't mean a record was necessarily created right then and there.

In most cases, the New York State birth records are non-existent for those born prior to 1847. So, as Josh recommends, researchers will need to use alternate sources for evidence of birth at that time - family bibles, religious records, or tombstone inscriptions are just a few possibilities.

Susan wraps up by noting that some of us may need to be satisfied with a date range rather than a specific date - for many early New Yorkers, that's the best we can do. We'll be back next week with some more questions and answers from this great Hangout session. Make sure to check our events calendar frequently to see when our next Hangouts and live webinars are scheduled!

Was your question answered? If not, click here to submit it for the next live Q&A, happening on Wednesday June 21 at 4:00 p.m. ET