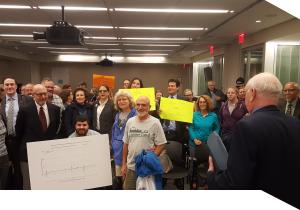 This morning we attended a meeting of the NYC Board of Health at the New York City Department of Health and Mental Hygiene.

This meeting included an agenda item for the official vote on last fall’s amendment to restrict public access to birth records for 125 years and to death records for 75 years.

We knew beforehand that this amendment was likely to pass – however, your voices certainly had a tremendous impact on this process.

Here are the important takeaways from the meeting:

1. Your voices were heard

In his presentation to the Board, the New York City Registrar, Steven P. Schwartz, noted the outpouring of comments – more than 5,000 – in opposition to the amendment.

In fact, according to his report to the Board, only two comments were made in favor of the changes: one from New York State and the other from NAPHSIS.

Some members of the Board clearly read your comments and asked thoughtful questions regarding the process and our needs as family members and genealogists. Your voices did not go entirely unheard.

2. A new amendment has been proposed

While the amendment was passed by the Board of Health (with one “no” vote and one abstention), your comments forced the Health Department to propose a second amendment allowing for greater access to these records.

We are still awaiting the precise text of the amendment, though the presentation summarized its contents.

The following individuals would be able to obtain copies of birth records (with proof of death):

For those seeking death records the list of qualifying individuals would include:

Many of these were noted to be “new” designations and it was stated that the Department would “accept an applicant’s representation” to obtain the certificate. Questions were raised regarding step-relationships and adoptions, which went unanswered.

This proposed amendment exists because you spoke up!

3. The restrictive rules may spread

It was stated that the New York State Department of Health was considering adopting the strict timelines (125 years for birth records and 75 years for death records) that are now part of the New York City code. We have further work to do!

While we are extremely grateful that the list of those qualified to obtain birth and death records is proposed to be expanded, we do not feel that the list is adequate for the needs of those tracing the stories of New York’s families.

This fight is far from over.

Yesterday we met with representatives from local and national genealogical organizations regarding our next steps and together determined to form an official coalition to protect access to New York’s records.

We are working swiftly to finalize plans and hope to share more details regarding this important development shortly. For those leaders of organizations who might be interested in learning more, please contact me at president@nygbs.org.

What Can You Do?

The new amendment mentioned above that expands access to birth and death records will be published, open for public comment, and a hearing will be held. As soon as this happens, we will share the news (sign up for our email newsletter, the NYG&B eNews, above).

Your constructive comments will again be needed.

In the meantime, we ask that you begin thinking about specific examples of your need to access birth and death records from New York.

The more detailed we can be in our approaches, the easier it is for decision makers to understand the importance of accessing these records.

In the coming days and weeks, we will be asking you to share these examples with us as we plan our next steps.

Thank you for your time and support.