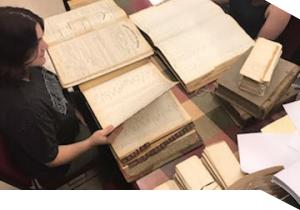 An Abundance of Rebecca Kaplans, but which one is mine? Avoiding accidental ancestral identity theft

The blog was written by NYG&B Summer Intern Reba J. Weatherford, who writes about a research challenge she faced while investigating Rebecca Kaplan, a Russian immigrant who became a citizen in 1931. Reba encountered her petition for citizenship while inventorying naturalization records at the Queen's County Clerk's office and then attempted to locate her in other records. But this presented a challenge—there were many Rebecca Kaplan's living in New York City during this time period! In this article Reba reviews a few research tips she learned while trying to find one particular individual among many with the same name—a challenge many researchers face.

Last year, I had the opportunity to intern with the Queens County Clerk’s Office (QCC).

The QCC, in conjunction with the Bronx County Clerk’s Office, began a project in 2019 to digitize their naturalization and petition records. The project, funded in part by a grant from NARA, will take several years to complete. Eventually, the records will be freely available to the public on databases managed by the respective offices.

The QCC enlisted the help of interns to organize and inventory the records before sending them to a third-party vendor for digitization. While there, we were also asked to research petition applicants randomly selected out of the over 20,000 applications from Queens County.

The plan was to build something like life portraits of the applicants and to possibly connect them with other records at the QCC such as New York State Census records from Queens County.

My research was on Rebecca Kaplan, a wife and mother who applied for naturalization in 1931. Rebecca, formerly Beile Zelde Romanowska, immigrated from Russia in 1914, whilst still single and childless, and settled first in Philadelphia before later moving to New York City.

My main goal was to locate an entry for her in the 1925 New York State Census. Although the QCC has the Queens County state census records, there is no comprehensive index for the collection and it easier to just locate the entries first on FamilySearch and then find their corresponding entries in the physical volumes.

After a quick search for Rebecca, I realized this would be a more difficult research assignment than I initially assumed. As it turned out, quite a few Rebecca Kaplans were living in New York City at that time—and at least three of them, like my Rebecca, had husbands named Abe or Abraham, had immigrated from Russia, and were born around 1892.

While attempting to identify the Rebecca Kaplan I was looking for amongst her like-named New Yorkers, I picked up a few tips.

1. Make a timeline listing all the information you know about the person, including locations.

Doing this helped keep me organized and gave me an easy reference tool to use throughout the search.

I listed everything I learned about Rebecca from her naturalization application. Her petition also indicated that her husband had filed a naturalization petition in the Bronx in 1923 and gave the petition number for that application. So, I requested that record and after receiving it I included all the information from it in my timeline as well.

I did some research on those listed as witnesses on Rebecca’s application to see if she might have lived near them in 1925.

But, overall, I found that it was much easier, especially in census records to focus on the names of her children because their names were distinct from the children of the other Rebecca Kaplans. Eventually, by using the children’s names, and verifying the address from the application, I was able to find the family in the 1930 federal census.

When searching for a relative with a common name, it helps to have as much information on the person as you can locate. Even records or information that may not seem relevant at first could prove to be a clue in the long run. In Rebecca’s case, a date for how long she had resided at her current address, while not likely to be wholly accurate, did give me some assistance in tracking her movements around the city.

And, although outside of the scope of this project, searching for synagogue records, newspaper articles, and the like could have given me a much rounder picture of Rebecca’s life.

4. Keep in mind that your ancestor was a unique individual.

Although there might have been 100 Rebecca Kaplans living in New York in 1931, only one of them was the Rebecca Kaplan I was searching for.

Focus on what you already know about the ancestor, rather than focusing on the things you don’t know about them. This may seem straightforward, but we often forget it when we are researching ancestors whose identities can be difficult to sort out.

In your own research, it may at some point seem impossible to sort your ancestor from the bunch. But just remember that, despite having a common name, your ancestor was a unique individual with their own unique story. In my case, I was able to find the correct Rebecca primarily by using the names of her children.

You may find that you need to focus on the smaller details that shape your ancestor’s identity. The point here is to focus on what you already know about the ancestor, rather than focusing on the things you don’t know about them. This may seem straightforward, but we often forget it when we are researching ancestors whose identities can be difficult to sort out.

To be honest, I still haven’t located an entry in the 1925 census that I can positively identify as my Rebecca Kaplan. But I’m still pretty sure that she was living in New York City at that time. And by using my timeline, I was able to locate other records on Rebecca, though none in the QCC vault.

Identifying common-named ancestors can be frustrating at times, but that makes it all the more rewarding when you are finally able to sort it out.