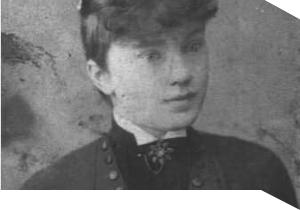 This article was written by NYG&B intern Rikki Schlott-Gibeaux. Drawing inspiration from her own family history, Rikki sheds light on the experience of a unique group of immigrants by synthesizing numerous historical monographs and other sources.

More than 34.5 million Americans can trace their ancestry back to Ireland. Most are descendants of famine-era refugees who fled starvation and oppression in pursuit of the American dream.

The immigrant women who made this journey, though grossly understudied, are critical to the histories of immigration, women, and New York State alike. Moreover, they are the foremothers of Irish-America.

This, then, begs an important question for historians and genealogists alike: What was the genuine experience of the innumerable Irish women who made this voyage?

This article will shed some light on this question by synthesizing several historical works that touch upon the topic, giving you a greater understanding of the turbulent experience of this unique and often overlooked group of immigrants.

A unique group among immigrants

The movement of women from Ireland is extremely distinctive among other trends in American immigration history.

In an era when the vast majority of female immigrants traveled with husbands and children, most Irish women did not.

Arriving at ports of entry in the mid-to-late nineteenth and early twentieth centuries, Irish women immigrants were as numerous as Irish men, and, averaging only twenty-one years of age, the majority were single and independent of a family unit.1

What motivated so many Irish women to immigrate? Most of these immigrants sought the marriage and work prospects America had to offer.

They were beguiled by the rumors of stateside glamour—often friends and family members already across the pond sent letters back home, reporting “how the floors in America shone like the dishes of their Irish dresser.”2

The choice to immigrate marked a refusal of dependency and a decisive reclamation of destiny as these young women “actively chose to abandon diminished lives at home to embrace adventure abroad while seeking jobs, husbands, and independent adult status.”3

Why did so many Irish immigrants become domestic servants?

The typical Irish woman immigrant settled in an East Coast city. In her search for employment, she almost invariably landed in domestic service--especially true of those who settled in New York.

In 1860, for example, 94.5 percent of employed Irish women living in Kingston, New York, were domestic servants.4

She was a very logical fit for such a role. Along with her English language skills, she was likely employed in domestic work back in Ireland and thus possessed prior experience.5

Another reason for this trend is that the Irish-American community likely supported her job search via word of mouth, employment agencies, or even the Catholic Church. The New York Sisters of Mercy, for example, ran a month-long servant training program which helped twelve thousand women secure employment.6

The socio-economic landscape also contributed to her destiny in service. The inflation of upper and middle-class urban populations meant that demand consistently exceeded supply for servants in American cities.

Infamous nineteenth-century social reformer Helen Stuart Campbell noted that domestic service was “confined chiefly to the great cities… [and] so interwoven and integral a part of the present social structure.”7

An emergence of a certain bourgeois fashionableness of having servants floating about one’s household made hired help a truly hot commodity.

The tribulations of life as a domestic servant

Afloat in the social tides of American urbanity, the Irish domestic servant found her niche but, alas, was adrift in a foreign world. Monotony, odd hours, and subordination stained her experience. Servants quarters were rarely made comfortable, and visitors were seldom allowed for fear of the “echo of the Irish howl, the loud Hibernian guffaw” through the parlor.8

Some saw their American dreams eclipsed by the grim routines of service.

The place in Anglo-American society to which these young women were relegated was incongruous with their expectations in immigrating; in the words of a former servant, “You’re never quite sure that your soul’s your own except when you are out of this house… We came to this country to better ourselves, and it’s not bettering to have anybody ordering you around.”9

The caricature of the "Bridget"

“Bridget,” an unflattering caricature of an Irish maid appeared in newspaper cartoons throughout the country. The term seems to have been born out of nativist anxiety over the inundation of Irish Catholic immigrants.

Contrasted with impressions of an elegant and matronly American lady of the household, Bridget was hardly a she—masculine, simian, toothless, unmannered, boisterous, et cetera. She teetered between human and ape, between man and woman, and therefore in the eyes of her society, the Irish domestic servant was always less-than.

The “Bridget” epithet ignited such ubiquitous prejudice against Irish domestic servants that it trickled down even to her fellow maids.

In an 1895 letter to The New York Times, an anonymous former lady’s maid lamented the degradation of the profession by the Irish, or as she refers to them “the dirtiest and most grossly ignorant people.10

Her letter continues to devise a plan for returning domesticity to its former Anglo-glory: “The President [should annex] Hawaii and then on the 17th of March charter enough steamers to send all the Irish servants in New York out there… where they would fight amongst themselves, which they would do until they were exterminated.”11

Though perhaps comedically egregious, this letter speaks to the pervasiveness of anti-Irish sentiment faced by these young woman immigrants. While first-generation Irish women often found their trajectories stagnated by servitude, many spoke out fiercely against mistreatment and prejudice.

Insubordination truly coursed through their veins; Irish women were greatly overrepresented in labor reform leadership.12 This is often attributed to the zealous assertiveness of the Irish spirit. A prominent example was Mother Jones, a fierce orator and organizer famously called  "the most dangerous woman in America" by a United States district attorney.

The indigent Bridget, perhaps, was a burlesque of the “assertive behavior of Irish servant girls, rooted in Irish culture and exacerbated by their democratic notions of equality, defied by their American employer’s expectations of submissive servant behavior."13

Many Irish women had trouble tolerating their loss of autonomy. This is perhaps best summarized in the words of a servant herself: “Women care for freedom as much as men do. Of course they won’t get so much, but I know I’d fight for mine.”14 Not forgotten: Their sacrifices for future generations

Although the life of an Irish domestic servant was far from easy, these young women purposely and fiercely carved out a space for their progeny in America. While 60.5 percent of first-generation Irish women worked in the domestic industry, only 18.9 percent of their daughters did.15

Thanks to many domestic servants’ purposeful dedication to the education and assimilation of their progeny, their daughters instead pursued a richer diversity of occupations and became mothers of flourishing Irish-American communities.

With a present Irish-American population seven times that of Ireland itself16, the impact of these young immigrants is so much richer than “Bridget.” They are the true pioneers and foremothers of Irish-America.

7. Hellen Campbell, Prisoners of Poverty: Women Wage Workers, Their Trades, and Their Lives​ (Boston: Little, Brown, and Company, 1900), 236 ^ Back to text

9. Campbell, Prisoners of Poverty: Women Wage Workers, Their Trades, and Their Lives, 225 ^ Back to text

14. Campbell, Prisoners of Poverty: Women Wage Workers, Their Trades, and Their Lives, 224 ^ Back to text

16. Sara Kliff, “The Irish-American population is seven times larger than Ireland” The Washington Post. Accessed 6 August 2020 | ^ Back to text